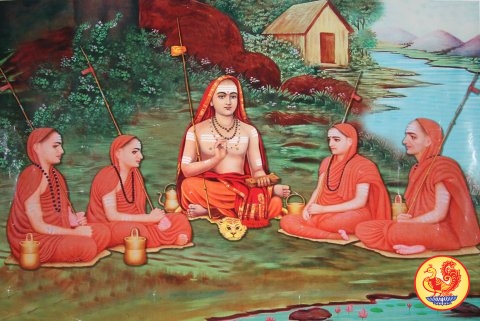 Sri Gurubhyo Namaha
The following is a letter that I wrote in 2012 to my dear brother who is with the Sringeri Acharya , after the completion of a more-than-a-year-long weekend-satsanga on the first four sutras of the Brahma Sutra Bhaashya conducted in Bangalore by Swami Paramasukhananda of Ramakrishna Ashram,  that I attended along with a few fellow sadhakas.
Its been six years and these feelings have only grown.
– Prasad
___________________

Hope you are doing well and enjoying Acharyal’s presence and the sadas.

By the grace of the Lord, today the Chatussutri classes were completed for us by Swamiji. Just wanted to share a few of my thoughts on what has transpired.

I certainly did not join this class out of knowledge of what the Brahmasutra was in our tradition, what it sets as its aim, and the greatness of Bhagavatpaada’s Bhasya to it. It was just by a chance conversation in IISc with a friend (a classmate at IISc and at RKMutt) that I overheard this being mentioned as a ongoing class in the RK Mutt and I thought I would give a shot at it just out of curiosity.

Already 12-13 classes were over by the time I went for my first class. I managed to catch up with these through mp3 files. The classes were all structured in such a way that a Hindu with a vague idea of what Hinduism is and with some reasoning capability would all be able to understand the teaching, at least on the lines of a secondary / paroksha level.

The first 8 or so classes were devoted altogether to what the problem (samsaara) was and what is the solution is, and how all Pramaanas except Vedantha fail to address the issue, and why Vedanthic words are pramaana for the solution. This was an important exercise for people like me who have not had any idea about the Veda’s status as pramaana.

After this, the adhyaasa bhaasya and the chatussutri bhaasyas were handled by Swamiji. The total number of classes would be around 60 I think.

Now for a few personal feelings.

(1)   The most obvious first impression, ever since I heard the first few lecture mp3s before attending my first class in person, was the depth and importance given to logical thinking and analysis. This was a breath of fresh air distinguishing Vedantha from all the spiritual/religious works out there, useful though they might be. The demand made by vedantha on a student, that of the necessity of the application of shruti, yukthi and anubhava, probably encompass all of human mental effort and this is indeed the greatest reason to why a human birth is important and what it is really to be used for.
(2)   As I have kept attending the classes and when I listen to the old classes again, it seems to me that all along Swamiji has infused his vairaagyam, his shraddha towards the Veda, his absolute and utter conviction about the paaramaarthika tattva, and his absolute and utter conviction about the world as tuccha, etc. There were so many times that he would take routes long and far from the actual point under consideration Bhaasya towards illustrating one or more of these convictions and then bring it back convincingly again to the Bhaasya. I think this made a huge practical/spiritual significance to each of us in the class and rubbed off in some small amount on me too.
(3)   The Bhaasya is just similar to the Lord’s Shristi (as Acharyal reminds us frequently), it is (or shows?) Bhagavatpaada’s achintya-aparimita-rachana-vaibhavam. There is no doubt that it is and will always be a wonder and the greatest gift of the Lord to humanity.
There is probably more to say, but for now I will stop with these. I continue to feel overawed by the simultaneous simplicity of the Vedanthic teaching, and all the intensive mentally demanding prakriyas revealed by Shruti expounded by our Achaaryas in revealing that simple teaching. Each one seems to be inseparably entwined with one another, reinforcing each other again and again, with the sole purpose of removing sorrow. It makes me feel so happy simply to know that there are many who have listened to this in the past, who will do so in the future. I hope and pray that many more would be blessed with an understanding of the value of this teaching, for living would be more harmonious and sorrow-free to that extent.
There is little doubt that everyone who has listened to the teaching and can appreciate it even a little bit is aware of the un-repayable debt owed to the Lord, the Shruti and the Guru parampara and indeed to everyone who helped knowingly and unknowingly on the spiritual journey. I certainly feel an immense sense of gratitude everyday and remain flummoxed about what I can do about repaying that un-repayable debt. The only thing in my reach seems to be to live this life to further qualify myself to be worthy of the teaching and try to keep in touch with it in whatever way possible.
With such prayers and with much love,
Prasad.